Patna diary: A city under stress 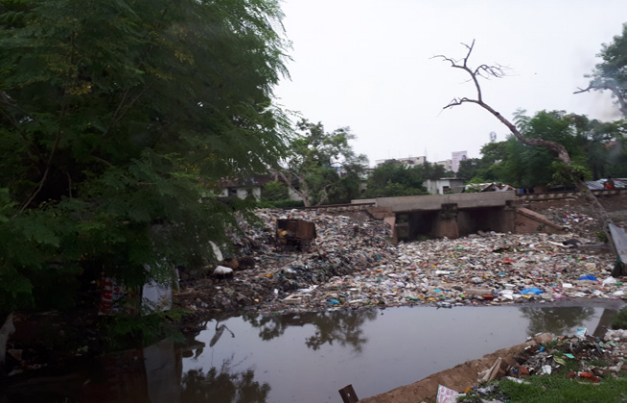 Patna, the capital of Bihar, is an expanding city, both in terms of area and population. Climate change impacts are being felt across this metropolis and it is the more vulnerable, the marginalised, who find it increasingly difficult to cope and respond to such climate change induced extreme events. The city faces the challenges of urban flooding, unplanned infrastructure development and seems to be already on the way to be stressed out.

Waterlogging is already rampant, and its reach has increased vastly with more regions experiencing it. Destruction of water bodies and building over open spaces have reduced the water holding capacity of the city, and turned the city even more fragile.  And of course, it is the poor and the marginalised who face the brunt of this. They are the ones who usually live in these at risk areas, and their homes and lives are both disrupted when such events occur. Water easily enters their low-lying houses, especially in the slum areas. The men and women lose out on their daily wages, their source of income, as they run around trying to salvage their homes and belongings. For the children, it means missing out on school, even as the roads to these areas gets inundated. In other case, the schools themselves may shut down due to the heavy downpour, cutting short a child’s educational journey.

Patna not only has insufficient drains, but also an inadequate sewage system. Open drains dot the city and there is an absence of an effective waste management system. And so in the waterlogging prone areas, when heavy rains lash, the drains engorged with the heavy load, simply spill out all that right onto the streets.  There this contaminated water lies for days, seeping into the ground and contaminating the groundwater. For the mosquitoes, a convenient breeding ground is ready, but a major health issue for the inhabitants.

More heat and more cold, it is getting colder and warmer, both the extreme temperatures are on the rise. Use of air conditioners is on the rise as is the incidents of heat strokes. Homes are poorly ventilated dependent upon power based on fossil fuels; green areas are vanishing, land becoming concretised and water bodies disappearing fast.  All this is adding to the heat island effect in the city. For more days now, the duration of temperature regime that between 10-20 0C, a range conducive to mosquito breeding, has increased. Obviously, water-borne diseases too are on the rise.

Periods of extreme humidity have increased, and the interplay of increased temperature and humidity has created a more problematic and unhealthy environment.

A large floating population moves into the city every single day in search of daily wages. A feeling of responsibility and lack of ownership by the people adds to the vulnerability factor in the city. Encroachments, loss of blue-green spaces, lack of enforcements of Master Plan, poor governance mechanisms and administration of basic services; All these exacerbate an already frail condition.

The stress and the shocks that the community face, more so the marginalised communities, are on an upward swing. Urban floods, waterlogging, sun stroke and a sudden increase in diseases; all these add to the stress of the people living in the city. A shortage of toilets can thus have both sanitation and health ramifications. All this spills over in the form of physical, mental or financial duress for the community.

Stressed out in the city

All these factors enhance the climate risks in the city, giving rise to umpteen shocks and stresses that render people who are marginalized and live in the fragile settlements of the city, even more vulnerable. The impact is much more on the children, who are affected to a greater extent.

This is the 2nd blog based on an excerpt from ‘Children Focused City Resilience Action Strategy for Patna Urban’, a report published by the Gorakhpur Environmental Action Group (GEAG), supported by UNICEF, India.

You may read the 1st blog ‘Patna diary: How a changing climate is making its presence felt ‘ right here.