PeriUrban: Is it the Unwanted Child of “Rural and Urban” ? 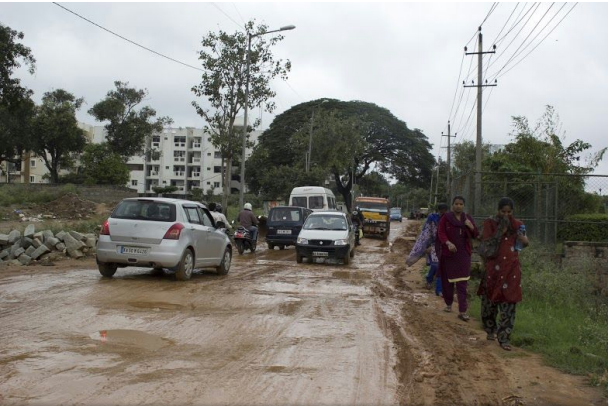 The conference was an outcome of the project “Enhancing Climate Resilience of Gorakhpur City through Climate Resilient PeriUrban Agriculture”. The event was attended by Sumetee Pahwa Gajjar and Kavya Michael from the ASSAR consortium, IIHS Bangalore. This conference was a first of its kind in the country bringing together researchers grappling with various methodological and practical challenges of studying and understanding peri-urban areas, and the role they play in sustaining city functions.

The conference was also attended by peri-urban farmers, policy makers, as well as practitioners from the fields of urban affairs, water management, engineering and ecosystem revival among others. The conference was bilingual and the inclusion of peri-urban farmers Ramrajya Yadav and Chanda Devi added a new dimension to the debate by balancing theoretical frameworks with lived experiences. This also showcased the fact that GEAG’s four yearlong project involved action based research and the results were owned as much by the farmers as they were by the researchers.

What emanated from the conference? The deliberations in the conference emphasised the need for a comprehensive understanding around peri-urban areas using a sociopolitical and ecological framework.

Following are some of the key points around which the discussions revolved:

1) Multiple conceptualisations of the peri-urban: There is a significant gap in literature with regards to the conceptualisation of peri-urban areas. Dr. Aditya Bahadur from Overseas  Development Institute (ODI), put forth peri-urban areas as inherently dynamic spaces experiencing significant changes to landscapes and livelihoods. Dr. K.S. Murali from International Development Research Centre (IDRC), described them as the interface between town and country where urban and rural uses mix and sometimes clash. Amit Mitra, an independent researcher from Delhi, defined peri-urban areas as “the unwanted child of rural and urban”. Prof. Usha Raghupati, NIUA described them as transitional zones with significant governance ambiguity. She reminded us that these areas lay beyond municipal jurisdiction where public services such as water, sanitation, and waste disposal are not provided by rural or urban authorities.

Dr. Sumetee Pahwa Gajjar interrogated per-iurban areas from a vulnerability and social differentiation lens. She stressed the need to identify peri-urban areas as zones of contestation that display a dense overlap between geographical, socioeconomic, political and environmental dimensions of marginality.

2) The future of peri–urban areas: Panelists debated how cities will expand into peri-urban areas and whether this expansion will be consistent across various dimensions of urbanity. For example Dr. Bahadur noted that 70% of the urban infrastructure required by 2030 is yet to be built and is most likely to be built in peri-urban areas. Dr.Shiraz Wajih, President GEAG, argued that by 2050, 3/4 th of world population will live in cities. In the Indian context, the 2011 Census reportedthat for the first time in last 69 years, urban population recorded a higher absolute increase than the rural population. As part of PM Modi’s Smart City Mission, 20 cities of the 100 planned have already been identified. New development for these secondary cities will be an additional driver of change on the land between satellite towns and the most proximate primary city. Researchers agreed that this indicates further transformation of the rural hinterland across the country, with differential patterns of periurbanisation.

3) Peri-urban areas as critical for the city’s resilience: Researchers questioned the persistent and limited perception of peri-urban areas as providers of ecosystem services to the city. Peri-urban areas most certainly render carbon sequestration and climate regulation, water and air purification, and pest and disease control services; in addition to agriculture. However, in the context of climate change, the resilience of peri-urban areas to local change and environmental degradation should be fore fronted. For example, Dileep Singh from ISET International argued that a 15% increase in open spaces in peri-urban areas of Gorakhpur city can lead to more than 12% reduction in damages due to floods. Talullah D Silva, an architect from Goa, used the case of Panjim city to outline the role of social entrepreneurship to revive peri-urban areas by empowering and mobilising communities. An integrated conceptualisation of peri-urban areas will generate local solutions that allow them to thrive despite an increasing environmental burden imposed by urbanisation.

Veteran scientist Dr. M.S. Swaminathan put forth the idea of peri-urban areas as Special Agricultural Zones (SAZ’s), utilizing for instance, genetically fortified plants such as legumes, as opposed to Special Economic Zones (SEZ’s). Chanda Devi, a periurban farmer from Gorakhpur District, narrated how she successfully practiced mixed vegetable farming techniques and produced enough food for the table as well as surplus to be sold in urban markets.

The “garden man” from Bangalore Dr. B N Vishwanath reiterated that urban home garden habits should be promoted to ensure chemical free food on tables.Mr. K.V.S Prasad from Agriculture Man Ecology (AME) Foundation spoke about their practical experience of promoting organic terrace gardening in Magadi, a village near Bangalore. He emphasized that strong peri-urban systems are necessary for sustainable and healthy cities.

What emerged for us? Our knowledge of issues and challenges encountered in research and practice in peri-urban areas was much enhanced at this conference. These lessons will extend into our research work along the rural, urban continuum in the Bangalore subregion,within the social differentiation and gender stream of the ASSAR research programme. We are exploring how migrants from rural Karnataka often enter cities through transition zones and peri-urban spaces, and how their vulnerability to climate change impacts shifts as a result of migration. We were also pushed to think about arriving at functional definitions for the peri-urban in Bangalore as our understanding from the conference outlines that t here is no unified definition for the peri-urban, which tends to be highly contextual and specific to the political economy of urbanisation in a city.

This article has been authored by Kavya Michael, Post-doctoral fellow at IIHS, Bangalore. It has been republished here in partnership with them.